The United Nations consider clean water as a human right and define the access to clean water as one of the sustainable development goals (Agenda 2030). The implementation of this right remains a challenge for mankind, as in many parts of the world the drinking water is polluted.

One of the most serious contaminants is arsenic. It is known to cause long term health problems as cancer of the skin, lung, bladder, kidney, and liver and to have adverse effects on the nervous, cardiovascular and immune systems. It might also cause adverse pregnancy outcomes (Naujokas et al., 2013). The most common route of exposure to arsenic is from drinking water. Arsenic contamination of groundwater and has been a massive and neglected public health problem in several countries including Argentina, China, Taiwan, India, Nepal, and Bangladesh. Particularly in Bangladesh, arsenic contamination of groundwater is a large-scale problem and has been called the "largest mass poisoning of a population in history" (Smith et al., 2000). An estimated 25% of people in Bangladesh (~40 million) are chronically exposed to groundwater arsenic concentrations exceeding the WHO drinking water recommendation (BBS & UNICEF 2015).

It is known that the groundwater is contaminated with naturally occurring arsenic due to local biogeo-chemical processes, but the precise mechanisms of arsenic mobilization are still not fully understood. In Bangladesh, the arsenic is of geogenic origin and mainly associated with iron or carbonate minerals. Unfavorable conditions in the groundwater lead to a dissolution of the arsenic-carrying minerals and subsequently a release of the adsorbed arsenic. There is evidence that arsenic mobilization process is enhanced by organic matter, which can affect reducing conditions by supporting microbial activity (Lawson et al., 2016). In addition, phosphates can lead to arsenic release by competing for binding sites (Maier et al., 2017).

Besides natural processes (Smedley & Kinniburgh 2002), arsenic mobilization may locally be influenced by human activities, particularly affecting shallow tube wells. While Ravenscroft et al. (2001) consider peat degradation as the main driving natural process, they also suggest the need for a more detailed investigation on the influence of latrines as a possible source of arsenic mobilization. This hypothesis was not further pursued until recent research on human waste and its influence on arsenic mobility (Whaley-Martin et al., 2017). Through primitive as well as improved latrine systems, fecal matter is discharged into groundwater (Escamilla et al., 2013), which leads to a supply of microbial contaminants as well as phosphates and modern organic carbon to the sediment and groundwater. Previous studies had indicated a negative correlation between fecal markers and arsenic contamination of wells directly adjacent to waste water discharge or latrines (McArthur et al., 2012).

However, this work did not consider the temporal delay of microbial processes leading to anoxic conditions, which would result in arsenic mobilization in more distant wells downstream of the latrines. To understand the complex relationship completely, including the geochemical processes, research on arsenic mobilization is needed which considers the spatial and temporal context of the sanitary factors such as latrine type, location and use. 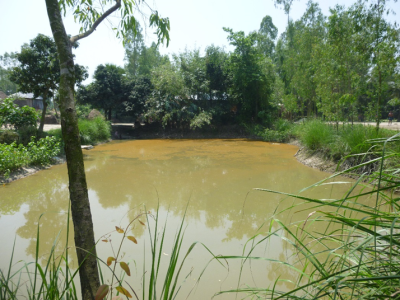 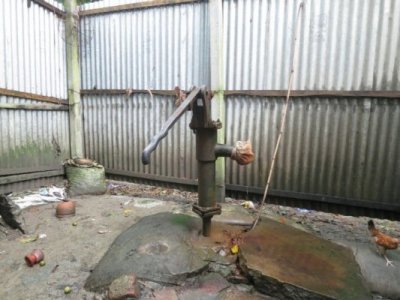 Figure 2: Almost every family owns a private shallow tube well with a hand pump. Defective equipment is common and can result in vertical seepage of wastewater into the ground water.

Common socio-cultural practices in rural Bangladesh, such as disposing wastewater inadequately, building latrines too close to tube wells, or keeping the infrastructure untended, are likely to worsen drinking water quality and increase arsenic mobilization (Escamilla et al. 2013, Dey et al. 2017). Whereas many studies have been published about the acceptance of arsenic mitigation strategies by the people in Bangladesh, few studies so far have investigated the perception and motivation of people in rural Bangladesh with regards to their sanitary behavior.

Figure 3 and 4: The tube wells are usually right next to the simple pit latrines, which feed untreated waste water into ground water.

Our aim is to better understand how the complex interplay of socio-cultural and sanitary factors influences hydrogeochemical processes, which lead to arsenic contamination of drinking water. Our research objective is to quantify the impact of various sanitary factors on arsenic mobilization and to investigate the influence of socio-cultural practices on sanitation. Our long-term goal is to contribute to develop interventions for reducing arsenic contamination of groundwater more effectively and to inform policy guidelines on improved sanitation structures. Based on this pilot project in Bangladesh, the methods could be adapted to be applicable to other regions with similar water problems.

The proposed research project will be embedded within the Food and Agriculture Approaches to Reducing Malnutrition (FAARM) trial (2015-2019), for which Dr. Jacobs has been working since December 2016. FAARM is a cluster-randomized trial led by Dr. Sabine Gabrysch at Heidelberg University in collaboration with the NGO Helen Keller International (HKI) to evaluate the impact of HKI's Homestead Food Production program in rural Sylhet, Northeast Bangladesh on child stunting, including 2,700 young women in 96 villages. In the 48 intervention villages, women receive support from HKI to create year-round productive home gardens, raise poultry and adopt better dietary and hygiene practices. The FAARM framework offers the necessary infrastructure for a project investigating arsenic. Sylhet belongs to the particularly arsenic-affected regions in Bangladesh with 38% of people being exposed to groundwater arsenic concentrations exceeding the WHO arsenic threshold of 10 µg/l and 25% being exposed to groundwater arsenic concentrations above the Bangladesh-specific threshold of 50 µg/l (BBS & UNICEF 2015). 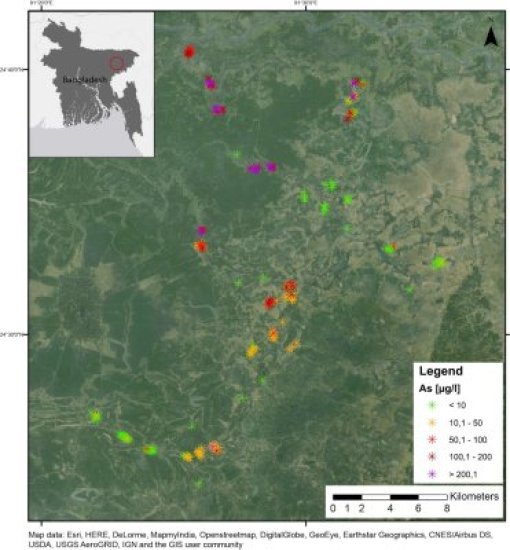 In spring 2017, a survey has been conducted to collect information about tube well use from 250 households distributed over the FAARM study area. The tube wells were labelled and water samples collected. Laboratory analysis of the samples, conducted by the working group of Dr. Maier, revealed a wide range of arsenic concentrations, varying from below detection limit to over 400 µg/l, with 68% of the tube wells exceeding the WHO arsenic threshold of 10 µg/l and 35% exceeding the Bangladesh-specific threshold of 50 µg/l. Analysis of the entire set of geochemical parameters has not yet been completed.

In various studies carried out between 2014 and 2017 in the District Ullapara, Northwest Bangladesh, Dr. Maier and his team observed at three different locations that tube wells with high arsenic water contamination were located close to frequently used latrines (e.g. in schools). This observation needs to be statistically verified in a sufficiently large sample.

The start-up funding from HCE-Start will be used to establish the cooperation and to collect data for at least one joint publication. The project aims to offer a base for a number of interdisciplinary doctoral theses. Continuing collective research is pursued in order to evaluate the applicability of the presented approach to other affected regions.