The contamination of drinking water with arsenic has been an unsolved problem in Bangladesh for many decades. Arsenic compounds are toxic and arsenic mobilisation is a complex mechanism caused by several processes.

In March 2019 we took water and gas samples of groundwater from three sites in the Sylhet district (NE Bangladesh). Our aim was to identify which processes are taking place to mobilize arsenic from the sediment into groundwater with special focus on dissolved gases. So far, dissolved gases such as methane and stable carbon isotope values (δ13C values) have been rarely studied in the context of arsenic mobility. Therefore, we analysed the collected water and the gas samples for their chemical composition and determined carbon δ13C values of methane (CH4) and carbon dioxide (CO2).

The results indicate that the processes of arsenic mobilization are different at each of the three study sites and are strongly depth dependent. As described by other authors, arsenic correlates well with phosphate, TOC, bicarbonate, ammonium and methane. Organic-rich clay layers are usually assumed as a common source of these constituents (Dowling et al., 2002).

The correlation between arsenic and phosphate can be explained either by competitive surface complexation or by a common mobilization process (Aziz et al., 2017). While the observed positive correlation of arsenic with TOC and its metabolites (e.g. methane) confirms that strongly reducing conditions prevail due to microbial degradation of TOC (Borch et al., 2010).

High arsenic in groundwater at high methane concentrations has been described before and is usually attributed to the final and complete dissolution of iron minerals under methanogenic conditions (Buschmann et al., 2009). In this case a strong correlation between arsenic and iron would be expected, which we did not observe at our site (fig. 1). 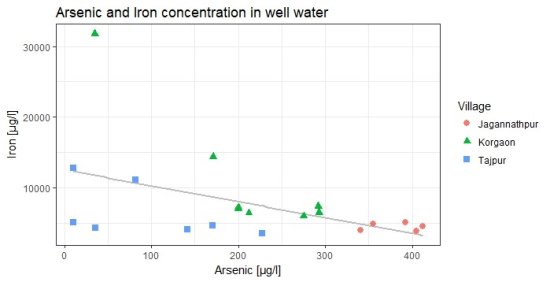 Fig. 1: Correlation between arsenic and iron at the three study sites. Orange highlighted are the wells deeper than 50m (changed after Noe, (2019)).

Overall, we found a good correlation between methane and total organic carbon (TOC) concentration (fig. 2), which indicates that the methane is likely formed in situ and did not migrate from deeper regions. Generally, we observed lower concentrations of methane, arsenic and TOC in the wells deeper than 50m, while these contained more iron. 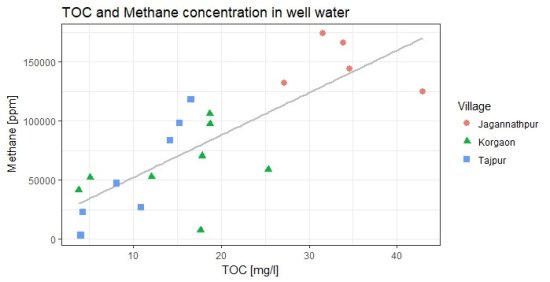 The δ13C values of methane and carbon dioxide indicate that the two gases are of microbial origin and not formed by thermogenic degradation processes. If classified after Whiticar (1999), CO2 reduction is the main process for methane formation in this region (fig. 3). 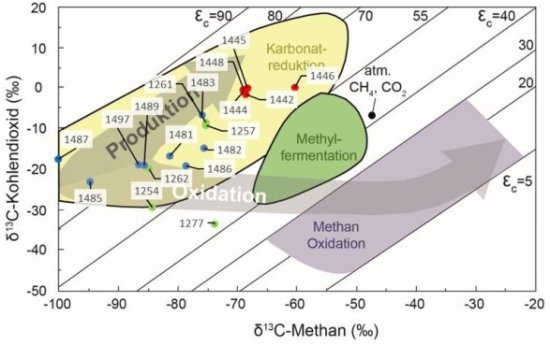 The literature research shows that the processes of arsenic mobilization under methanogenic conditions are unclear. Therefore, our future research will aim to elucidate the fate of arsenic during methane production, migration and oxidation with regards to organic and inorganic carbon, phosphorus and iron cycling.